From Wikipedia, the free encyclopedia

The Colombo Express, one of the largest container ships in the world, owned and operated by Hapag-Lloyd of Germany

Container ships are cargo ships that carry all of their load in truck-size intermodal containers, in a technique called containerization. They form a common means of commercial intermodal freight transport.

Cargo vessels contain a variety of dry goods items that are shipped all over the world, including foods, textiles, and electronics.

Container vessels owe their existence to an American trucker by the name of Malcom McLean. In 1931, McLean purchased his first truck which was used to send and pick up loads to and from vessels in various ports. During this time, while he used to wait impatiently for the truck’s contents to be loaded on to the ship he kept thinking of a more efficient and quick way to load and unload vessels and thus save enormous time and labour.

The earliest container ships were converted tankers, built up from surplus T2 tankers after World War II. In 1951 the first purpose-built container vessels began operating in Denmark, and between Seattle and Alaska.

The first container ship in the United States was the Ideal-X,[1] a T2 tanker, owned by Malcom McLean, which carried 58 metal containers between Newark, New Jersey and Houston, Texas on its first voyage, in April 1956.

In 1955, McLean built his company, McLean Trucking into one of USA’s biggest freighter fleets. All through the decades the idea stayed with him. It was in 1955, that he purchased a small tanker company called Pan Atlantic and adapted its ships to carry cargo in large uniform metal containers. On April 26, 1956, the first of his container vessels, the Ideal X, left the Port of Chicago and a new revolution in modern shipping resulted. Container vessels eliminate the individual hatches, holds and dividers of the traditional general cargo vessels. The hull of a typical container ship is a huge warehouse divided into cells by vertical guide rails. These cells are designed to hold cargo in pre-packed units – containers.

Shipping containers are usually made of aluminium, but other materials like steel, fibreglass or plywood are also used. They are designed to be entirely transferred to and from trains, trucks or trailers to and from a ship. There are several types of containers and they are categorised according to their size and functions.

Today, approximately 90% of non-bulk cargo worldwide is transported by container, and modern container ships can carry up to 15,000 Twenty-foot equivalent units (TEU). As a class, container ships now rival crude oil tankers and bulk carriers as the largest commercial vessels on the ocean.

Coming back to McLean’s invention, while it is a well established fact that containerisation caused a revolution in the world of shipping its introduction did not have an easy passage. Shipping lines, railway (railroad in the US) companies and trade unions vehemently opposed and tried to block the use of containerised ships. It took ten years of legal battles before container ships would be pressed into international service. In 1966, a container liner service from USA to the Dutch city of Rotterdam commenced.

Containerisation changed not only the face of shipping but it also revolutionised world trade as well. A container ship can be loaded and unloaded in a few hours compared to days in a traditional cargo vessel. This, besides cutting labour costs, has reduced shipping times between points to a great extent, for example it takes a few weeks instead of months for a consignment to be delivered from India to Europe and vice versa. It has also resulted in less breakage due to less handling and there is less danger of cargo shifting during a voyage. As containers are sealed and only open at the destination, pilferage and theft levels have been greatly reduced.

This is how containerization works:

Exporters load (stuff) their merchandise in boxes which are provided by the shipping companies. They are then delivered to the docks by road, rail or a combination of both for loading on to container ships. Prior to containerisation, huge gangs of men would spend hours fitting various items of cargo into different holds.

Gigantic cranes lift the containers and they are placed one on top of the other in their respective cells. Once the hull is loaded additional containers are stacked on the deck.

The lower shipping costs and faster movements which resulted due to containerisation has helped global trade grow in leaps and bounds. It is now possible for Americans to eat apples grown in New Zealand and gherkins grown in India. Fresh cut flowers are available at the Amsterdam auction houses in the height of winter. Indians are able to own the latest iphones and laptops as soon as they hit the market. Europeans are able to wear jeans made in Hong Kong. Cargo that once arrived in boxes (cartons or crates), bails, barrels and bags, now comes in factory sealed containers, with no indication to the human eye of their contents, except for a product code that machines can scan and computers trace. This system of tracking has been so exact that a two week voyage can be timed for arrival with an accuracy of under fifteen minutes. It has resulted in such revolutions as, On Time Guaranteed Delivery and Just in Time manufacturing. Containers arrive in factories in sealed containers less than an hour before they are required in manufacture, resulting in huge savings in inventory costs.

The larger container ships measure 210 metres long. They carry loads equal to the cargo carrying capacity of sixteen to seventeen pre WWII freighter ships. Today, every shipping line in the Globe has its fleet of container ships.

Container ships are designed in a manner that optimizes space. Capacity is measured inTwenty-foot equivalent unit (TEU), the number of standard 20-foot containers measuring 20 × 8.0 × 8.5 feet (6.1 × 2.4 × 2.6 metres) a vessel can carry. This notwithstanding, most containers used today measure 40 feet (12 metres) in length. Above a certain size, container ships do not carry their own loading gear, so loading and unloading can only be done at ports with the necessary cranes. However, smaller ships with capacities up to 2,900 TEU are often equipped with their own cranes.

Informally known as “box boats,” they carry the majority of the world’s dry cargo, meaning manufactured goods. Cargoes like metal ores or coal or wheat are carried in bulk carriers. There are large main line vessels that ply the deep sea routes, then many small “feeder” ships that supply the large ships at centralized hub ports. Most container ships are propelled by diesel engines, and have crews of between 20 and 40 people. They generally have a large accommodation block at the stern, near the engine room. Container ships now carry up to 15,000 TEU (approximately equivalent to 35 100-car double-stack intermodal freight trains) on a voyage. The world’s largest container ships, the M/V Emma Mærsk and her sisters, have a capacity of 15,200 containers.[2]

In 2008 the South Korean shipbuilder STX announced plans to construct a container ship capable of carrying 22,000 TEU,[3] and with a proposed length of 450 metres and a beam of 60 metres.[4] If constructed, the container ship would become the largest seagoing vessel in the world.[5]

Large container ships (over 7,000 TEU) have been built in the following shipyards: 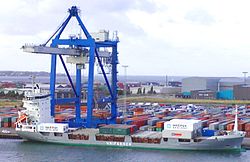 Container ship “Rita” loading at Copenhagen with crew on deck.

In March 2007, a London based container ship capsized in Antwerp, Belgium while loading.[6]

Maneuvers in coastal waters and ports managed in the wheel house may be dangerous, as evidenced by a container ship hitting the San Francisco – Oakland Bay Bridge on November 7, 2007.[7]

It has been estimated that container ships lose over 10,000 containers at sea each year.[8]Most go overboard on the open sea during storms but there are some examples of whole ships being lost with their cargo.[9] When containers are dropped, they immediately become an environmental threat – termed “marine debris”.[10]

Modern loading instruments (like MACS3 with BELCO, SEALASH and DAGO modules) assist to reduce the risks, caused by incorrect stowage of container cargo.

A container ship loading freight at the Mundra Port in India.

Cargo too large to carry in containers can be handled using flat racks, open top containersand platforms. There are also container ships called roll-on/roll-off (RORO), which utilize shore-based ramp systems for loading and unloading. ROROs are usually associated with shorter trade routes, as they are unable to carry the volume of crane-based container vessels. However, due to their flexibility and high speed, ROROs are frequently used in today’s container markets.[citation needed]

Economies of scale have dictated an upward trend in sizes of container ships in order to reduce costs. However, there are certain limitations to the size of container ships. Primarily, these are the availability of sufficiently large main engines and the availability of a sufficient number of ports and terminal’s prepared and equipped to handle ultra-large container ships. Furthermore, the permissible maximum ship dimensions in some of the world’s main waterways could present an upper limit in terms of vessel growth. This primarily concerns the Suez Canal and the Singapore Strait.

Since even very large container ships are vessels with relatively low draft compared to large tankers and bulk carriers, there is still considerable room for vessel growth. Compared to today’s largest container ships, Maersk Line’s 15,200 teu Emma Mærsk type series, a +20,000 teu container ship would only be moderately larger in terms of exterior dimensions. According to a 2011 estimate, an ultra-large container ship of 20,250 would measure 440m x 59m, compared to 393 x 56.60m for the aforementioned Emma Mærsk type ship.[11]It would have an estimated deadweight of circa 220,000 tons. While such a vessel might be near the upper limit for a Suez Canal passage, the so-called Malaccamax concept(for Straits of Malacca) does not apply for container ships, since the Malacca and Singapore Straits’ draft limit of about 21 metres is still above that of any conceivable container ship design.

In the present market situation, main engines will not be as much of a limiting factor for vessel growth either. The steadily rising cost of fuel oilhas prompted most container lines to adapt a slower, more economical voyage speed, of about 21 knots, compared to earlier top speeds of 25 or more knots. Subsequently, new-built container ships can be fitted with a smaller main engine. Engine types fitted to today’s ships of 14,000 teu are thus sufficiently large to propel future vessels of 20,000 teu or more.

For more details on this topic, see List of world’s busiest container ports. 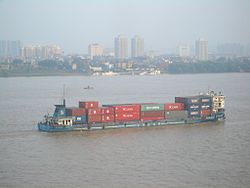 A container boat on the Yangtze in Wuhan, China